Mythology forms a vital part of traditions and culture. Tales and stories of gods and goddesses have  always been a quintessential part of civilizations. One of the most detailed and rich mythological stories belongs to Greece.  Greece has always been the center for philosophy, science and maths. Its literature isn’t too far behind either!

Greek mythology still holds a firm place in today’s world.Greek myths and legends make for some of  today’s most successful movies, books and works of art.

They also make great stories: ever since i started reading about them-starting with Percy Jackson, obviously, I was in love with them!

What is it that fascinates us through the ages in reading and relishing those ancient stories? Surely, it’s more than the raw fancy of a world full of mythical creatures and superhuman deeds, as entertaining as these may be.Greek myths speak of timeless elements inherent in human nature, as various schools of psychology have demonstrated time and again.

These are the compilation of 5 of the most coolest and interesting Greek Mythological stories that one must read!

While the gods thought of humans as a little more than pesky insects, Prometheus (patron of foresights) sorta loved the puny humans. He thought of more than a few ways to help them and what did he get in return? A  luxurious life of everlasting torture!

Good old Prometheus stole fire from  the gods and gave it to the humans which allowed them to become more civilized. Apart from that he did  a bunch of crazy stuff like-When he was ordered to establish animal sacrifice as practice in ancient Greece, Zeus’ left to Prometheus the decision about which portions of animals would be offered to the gods after sacrifice: the leftover would go to humans. Prometheus deviously covered bones  with “shiny grease,” while he disguised all flesh  and wrapped them with tripe. Then, he invited the Master of Heavens to choose the portion owed to the gods, and Zeus fell for the trick. When Zeus was planned to destroy mankind  Prometheus warned his son Deucalion of the imminent catastrophe, and he instructed him to build an ark in order to save himself and his wife Pyrrha.(yup thats where Noah’s Ark story comes from!)

His punishment for all of this was to have his liver continuously eaten by a vulture! Yikes! The myth of Persephone is, once more, a story of loss and recovery of what is dearest to our soul.

Persephone, also called  was the beautiful daughter of Demeter, Olympian goddess of , Agriculture and Cereals. She was her mothers beloved child. She was loved by humans too as she was responsible for the growing of the crops that would sustain their lives. One day, she was abducted by the sinister lord of the Underworld as she was out in the fiends of Sicily gathering flowers with her girlfriends. Hades had fallen in love with the bright and beautiful Persephone but Persephone dislike the dark and cold Hades. She was abducted and taken to the underworld. Later Demeter came to plead for her daughter saying that she wouldn’t be able to live without her. Hades consented and set up a compromise. Persephone would go up to the Earth for a few months and live the rest of the year with Hades. Persephone had also grown to love Hades and agreed. This story explains the seasons. Spring symbolises the arrival of Persephone- where plants start blooming and everything is bright. Winter and autumn mourns the loss of Persephone as she live Hades for those months.

4. THE MYTH OF NARCISSUS 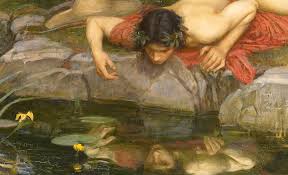 The myth of Narcissus is one of the most known Greek Myths, due to its uniqueness and moral tale; Narcissus, was the son of River God Cephisus and nymph Lyriope. He was known for his beauty and he was loved by God Apollo due to his extraordinary physique.

According to this myth, Narcissus’ parents were worried because of the extraordinary beauty of the child and asked prophet Teiresias what to do, regarding their son’s future.

When Narcissus was sixteen he was walking in the woods and Nymph Echo saw him and felt madly in love with him. She started following him and Narcissus asked “who’s there”, feeling someone after him.Echo responded “who’s there” and that went on for some time until Echo decided to show herself. She tried to embrace the boy who stepped away from Echo, telling her to leave him alone. Echo was left heartbroken and spent the rest of her life wandering; until nothing but an echo of sound remained of her. She repeated whatever others told her.

Nemesis, the Goddess of Revenge, however heard the story and decided to punish Narcissus. Narcissus sees himself in the pond and he is amazed by the beauty of the reflection.Narcissus was once walking by a lake or river and decided to drink some water; he sees his reflection in the water and became entranced by the reflection of himself. According to the myth Narcissus is still admiring himself in the Underworld, looking at the waters of the Styx.

One of the 12 tasks given to Hercules was to kill the Nemean lion. This lion was savage and fearless as he couldn’t be harmed by weapons. After attempting to kill the lion with arrows, which just bounced right off, Hercules had an idea and wrestled the lion and strangled it to death. He didn’t go away unharmed, though; the lion managed to bite off one of Hercules  fingers. After the lion was dead, skinned  it with it’s own claws and made some wonderful armor from the pelt and jaw. The constellation and star sign of Leo is said to honor the bravery of battle between the ferocious Nemean lion and Hercules.